3.1294223110096 year ago
Diocesan Priest diocesanpriest NCDVD Board offering a Holy Hour for all those who serve in this sacred ministry. #thinkingpriesthood https://t.co/lBkTaakiYb
2 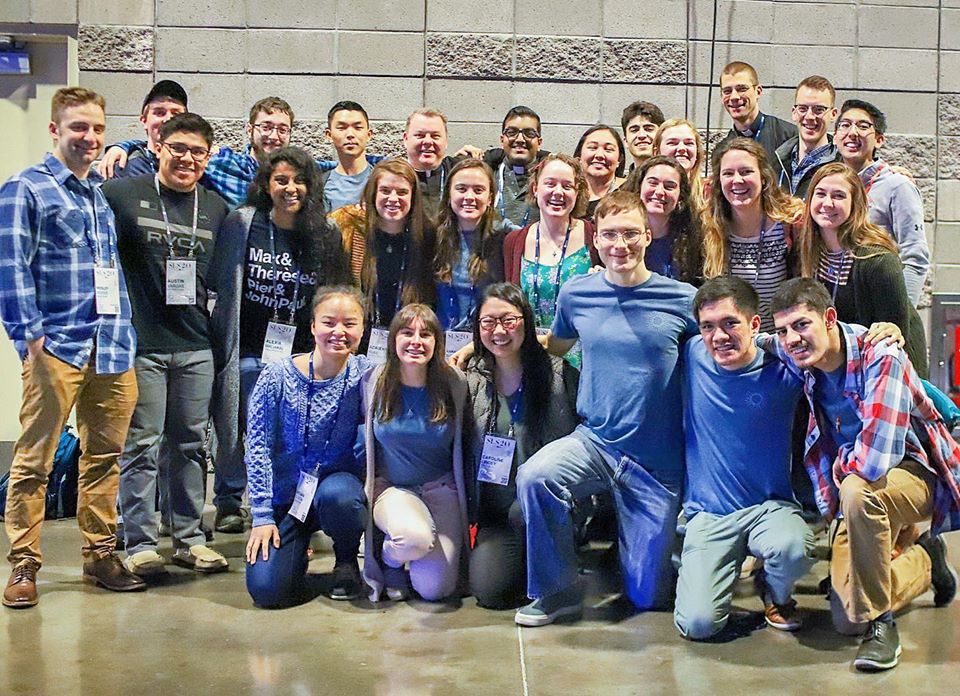 FOCUS Helping Priests to Be Priests

FOCUS Helping Priests to Be Priests

This past week, I attended a conference in Phoenix, Arizona hosted by the Fellowship of Catholic University Students (FOCUS). Along with about 9000 others, I enjoyed a powerful week long experience of encountering Jesus Christ in the Catholic Church. Listening to powerful, faith-filled talks by priests, religious men and women, and laity was truly edifying. I was particularly touched by the powerful witness of the religious sisters who spoke. It is difficult to create a sense of reverence in a convention center filled with 9000 people, but the Masses were reverent, beautiful, and prayerful. The music was heavenly, the preaching apostolic, and the devotion of the participants deeply moving.  FOCUS allowed all of us to experience the Church in all of its sublime beauty, truth, and goodness.

There are so many good things that I experienced during this week, but I would like to mention one in particular. I do so because it was not the thing that I would have anticipated being so moved by during the week. Throughout the week, I was continuously reminded of the beauty of the priesthood. Allow me to describe a few examples.
Each morning before Mass, I would arrive early to the area designated as the sacristy. On my first morning, I arrived and there were probably two hundred college age men and women in line for confessions. Thirty or more priests would hear confessions for 90 minutes at a time three times a day. Additionally, all day long you would see priests standing off to the side somewhere, hearing the confession of some random person who made the request. I heard numerous confessions outside the normally scheduled times. It was very moving to me to see the students taking advantage of the gift that God has given to them.
Also each morning, I was moved by the example of priests (hundreds of them) quietly praying the Liturgy of the Hours.  Most of us were praying it on our phones. All along the large hallway outside the sacristy, priests would quietly be praying their morning office. It struck me how here I see my brothers praying, but they (and countless others) do this every morning. Every day (all day) these brothers are praying for the whole Church, offering up these hours, sanctifying the day. We don’t see them. Hidden in their churches, chapels, cars, offices, wherever, they pray these prayers each day. I was really moved by this reminder that when I pray alone, I am not alone. I pray with these men and with all of the Church.
During the week, the Apostolic Nuncio to the United Sates was present throughout. I could see how someone with a job like his, might swing in for a few hours and then go. But he was there the whole week. What struck me about this is that he was there because he too is a priest. He, I think, was clearly moved by this extraordinary gathering of faithful young people. His presence was also an encouragement to the priests. He spoke to the priests and thanked us all for our ministry. Although I did not see him, I am told that he too joined in the rotation of confessions for the students. It was good to see someone with such a prominent position in the Church still focussed on what is really the most important thing–the sacraments and serving the faithful.
On my last day at the conference, I was distributing Holy Communion during Mass. I turned to see who the priest was standing next to me. It was Cardinal Mueller. He had preached a powerful homily the day before, but here he was–like any other priest–distributing Holy Communion. It was a beautiful testimony to me of who it is that we really serve. Also during the week, Cardinal Mueller was on the schedule of priests hearing confessions. It was beautiful to see a Cardinal (and other bishops) exercising this important priestly ministry. It was good to see them being priests.
I shared with my students on the last evening something that for me was a beautiful moment. This has happened to me many times in my priesthood, but it’s something that I think lay people would never get to see. I had a sense that conveying this story to my students might move them. I hope it also gives you some insight into the priesthood and to the life of the Church.
On one of the evenings during the conference, the students and FOCUS missionaries were in Eucharistic Adoration (all 9000 of them). Meanwhile, in a giant hall upstairs, hundreds of priests were hearing confessions. Before the confessions began, I decided that I should go to confession. I took off my stole, went and knelt down in front of a priest who was nearby, and made my confession. After he absolved me, he took off his stole, handed it to me, and made his confession. I could comment at length upon this, but I won’t. I simply hope that image provides some insight into the priesthood and the Catholic life.
There are countless things that I appreciate about FOCUS and about the recent conference. What most struck me this time, however, was how FOCUS provides priests with the opportunity to better live out their priesthood. They help create communities that are sacramental, that love the Eucharist, and love the Sacrament of Penance. They help build up friendships on college campuses that are directed to the Lord and that always lead to and are nourished by the Sacraments. FOCUS makes it easier for priests to encounter young people and to enter into friendship with them, and for young people to encounter Jesus through the Sacramental Ministry of the priest. Not bad. Not bad at all.

THE LONG RUN Turns out, there was room the whole time.

How to Be Holy in Quarantine
Scroll to top